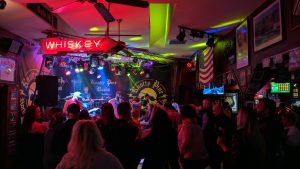 LDNL has performed for stars such as Jessica and Ashley Simpson, Jim Furyk, Brady Quinn, AJ Hawk, Bobby Carpenter and Tony Romo. They were selected as the pre-game house band for THE Ohio State Buckeyes Football Team, and have played in front of large audiences for the World Champion Cleveland Cavaliers, the Cleveland Indians and the Cincinnati Bengals.

The band has appeared multiple times on Fox Network Television performing live for an audience of over one million viewers, and have performed numerous shows live at the Rock and Roll Hall of Fame in Cleveland.

LDNL has appeared on, or performed with many live radio stations across the world such as: Artist First Radio, Clear Channel networks, Sirius Satellite Radio, and the U.S. Armed Forces Airwaves.

The band has performed for the U.S. troops across the world as part of the AFE/USO tours.

The band is heavily influenced by various genres of music, since each member has diverse musical taste, ranging from blues to funk, jazz to r&b, country to hip-hop, and beyond. LDNL possesses a live show that has gained Midwest recognition, as they play many of the crowd’s favorite cover songs from old school classics to new school rhymes.

For more fun things to do in Cincinnati this week, check out the latest issue of Fun10Cincy.

Tess Abney
Tess Abney is a freelance writer who was born and raised in the Quad Cities. She spends most of her time attempting to successfully raise three boys. In her free time, writing is her passion. Whether it is sharing local events and businesses with readers or sharing her thoughts on life, she finds comfort in the way words can bring people together.
Tagged: +LIVE+CincinnatiEventsKnottyPineLDNLmusicSportsmanClubThings To Do