Jackyl Taking the Stage at Bogart’s

Get wild and crazy at Bogart’s this Tuesday night! 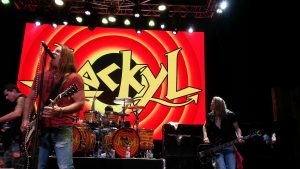 Jackyl is an American hard rock band formed in 1991. Their sound has also been described as heavy metal and Southern metal. Their eponymous album has sold more than a million copies in the United States with released hit singles like “Down on Me” and “When Will it Rain”. The band is best known for its song “The Lumberjack”, which features a chainsaw solo by lead singer Jesse James Dupree.

Purchase your tickets today at https://www.ticketmaster.com/jackyl-tickets/artist/752631?venueId=180996.

Tess Abney
Tess Abney is a freelance writer who was born and raised in the Quad Cities. She spends most of her time attempting to successfully raise three boys. In her free time, writing is her passion. Whether it is sharing local events and businesses with readers or sharing her thoughts on life, she finds comfort in the way words can bring people together.
Tagged: BogartsCincinnatiEventsJackylJesse James DupreeLive MusicThings To Do