In late 80’s Gin Blossoms started to grow a huge following as the #1 local music draw in Phoenix and certainly were the hometown heroes of their favorite hang, Tempe, Arizona. Gin Blossoms indelible jangle-pop sound was evolving during radio’s diverse mix of hair bands and grunge music superstars like Nirvana. After the Phoenix New Times chose them the cities best rock band, they qualified to play at the South By Southwest Music Festival in Austin Texas in 1989. That same year, College Music Journal dubbed them the “Best Unsigned Band in America” and added an invitation to perform on MTV’s New Music Awards in New York City. 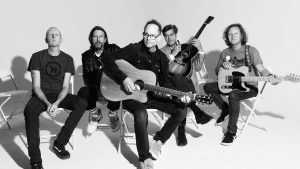 Taking their name from a caption on a W.C. Fields photo, Gin Blossoms signed a record deal with A&M and recorded their first EP “Up And Crumbling” in 1991. But, it was not until their breakout record “New Miserable Experience” in 1992 that their rise to fame began. “New Miserable Experience” kept the band on the charts for almost 3 years with singles “Hey Jealousy,” “Allison Road,” “Until I Fall Away,” “Mrs Rita,” and “Found Out About You.” The album took the airwaves by siege and held MTV hostage with multi cross-over hits in 4 different radio formats. It was this record that rocketed the band into the mainstream going on to sell over 5 million copies making the band a 90’s radio mainstay. In 1995, Robin Wilson, Jesse Valenzuela and veteran composer Marshall Crenshaw wrote the bands 4th of 9 sound track inclusions; “Til I Hear It From You.” The smash hit was released as a Gin Blossoms single and it appeared on the platinum sound track for the film Empire Records.

“In the old days, we used to joke that there was something for everybody in this band,” says Wilson. “There’s just something about the way we play and sound together, but in the end, it’s really about the quality of the songs. If you’re a band and want to sustain a career, no matter what you look like or how you play, you’ve got to have great songs. So it’s those songs and the sound we make…my voice, the guitars, tempos, that add up to something indefinable.”

Over the years, Gin Blossoms have toured over 25 different Countries including a five-city tour of Iraq in 2010. “It was so much fun to entertain our troops. It’s really insightful to see firsthand how our troops live in a combat zone. It really helped widen my understanding on the sacrifices they make to protect us at home and abroad. I hope all Americans understand how important it is for us to extend our thanks” says Robin.

In February 2017, Gin Blossoms connected with Mitch Easter and Don Dixon to engineer and produce their brand-new record, now readying for release in early 2018. The band will perform in over 100 cities and with additional promotional stops, 2017 will make one of the busiest touring years since the mid 90’s.

Tess Abney
Tess Abney is a freelance writer who was born and raised in the Quad Cities. She spends most of her time attempting to successfully raise three boys. In her free time, writing is her passion. Whether it is sharing local events and businesses with readers or sharing her thoughts on life, she finds comfort in the way words can bring people together.
Tagged: BogartsCincinnatiEventsGin BlossomsLithiumNew Miserable Experience LiveSiriusXMThings to do