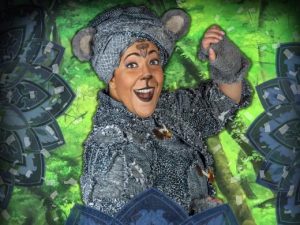 Saturday Feb 16 at 2 p.m. (Signed for the hearing impaired)

The jungle is jumpin’ with a jazzy beat in Disney’s The Jungle Book KIDS. Specially adapted from the classic Disney animated film, this musical features a host of colorful characters and your favorite songs from the animated movie.  Based on the works of Rudyard Kipling, the “Man-Cub” Mowgli, bounds through the jungle and learns what it means to be human.  You won’t want to miss this culturally-infused and spectacular Disney classic!

Banished by the ferocious tiger, Shere Khan, a human boy named Mowgli and his panther friend, Bagheera, are on the run in the deepest parts of the jungle. On their journey, the two meet a sinister snake named Kaa, a herd of elephants and a giant bear named Baloo, who teaches them the swingin’ musical rhythms of the jungle. After surviving a dangerous encounter with a band of monkeys led by King Louie, Mowgli and Bagheera are forced to run for their lives. When Shere Khan returns, our heroes must rally their fellow animals into battle and restore peace throughout the jungle.

In an effort to increase cultural diversity, as the production is set in the jungle of India, The Children’s Theatre of Cincinnati (TCT) is collaborating with various local groups to comprehensively infuse the production with Indian culture, in order to authenticate the production in a culturally-relevant and educational manner.

For more information and to purchase your tickets today, visit http://tafttheatre.org/events/2019/02/disney-s-the-jungle-book-kids4.

Tess Abney
Tess Abney is a freelance writer who was born and raised in the Quad Cities. She spends most of her time attempting to successfully raise three boys. In her free time, writing is her passion. Whether it is sharing local events and businesses with readers or sharing her thoughts on life, she finds comfort in the way words can bring people together.
Tagged: Children’s Theatre of CincinnatiCincinnatiCTCDisneyEventsJungle BookkidsTaft TheatreThings to do