Celebrate this Valentine’s Day with an R&B Love Jam 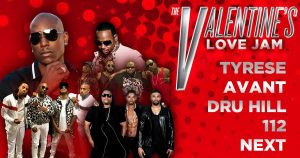 Tyrese burst on the scene in 1994 and quickly found game in the music world and since has become a actor, model, screenwriter, VJ, model, author, and television producer. His music career has ben highlighted by an American Music Award for Favorite New R&B/Soul Artist, 5 grammy nominations, and the 2012 Soul Train Music Award for Song of the Year for “Stay”.

Cleveland, Ohio native Avant just released his eightalbum appropriately titled The VIII, which peaked at #8 on the Billboard R&B Chart. His previous records saw multiple #1 showings on the R&B charts as well as #1 singles such as “Separated” and “You and I”.

One of the top R&B groups in the 1990’s, Dru Hill rose to commercial success with #1 hits “In My Bed”, “Never Make a Promise”, How Deep Is Your Love”. The group has released four studio albums to date, with their fifth entitled “The Second Coming” dropping in 2019.

Another of the top 90’s R&B groups, Next, has been on the R&B scene from the early 90’s. They have only released four studio albums, but have seen eight successful singles. They reached #1 on the billboard charts with “Too Close” and #1 on the R&B charts with “Wifey”.

Grammy Award winning artists, 112, have seen waves of success in their career. One of the first Bad Boy Records artists, their debut, 112, went double platinum and stayed for an extended time on the R&B/HipHop Album Charts. They won a 1997 Grammy Award for Best Rap Performance by a Duo of Group with Sean Combs and Faith Evans for “I’ll Be Missing You”. Their biggest fan and critical acclaim came from the single “Peaches & Cream” which saw success on the Rhythmic & Hot 100 charts as well as being nominated for MTV Best video and a Grammy Nomination for Best R&B Performance by a Duo or Group.

Tess Abney
Tess Abney is a freelance writer who was born and raised in the Quad Cities. She spends most of her time attempting to successfully raise three boys. In her free time, writing is her passion. Whether it is sharing local events and businesses with readers or sharing her thoughts on life, she finds comfort in the way words can bring people together.
Tagged: 112AvantCincinnatiDru HillEventsNextThings to doTyreseUS Bank ArenaValentine’s Love Jam